The Romanian Sfinx - An ancient Hall of Records? 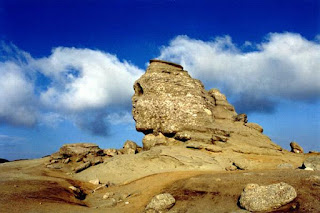 The Romanian Sphinx is a natural rock formation on the Bucegi Mountains which are part of the Carpathian Mountains. The Romainian Sphinx was formed solely by natural erosion and appears as a human figure only when viewed from this particular angle.
It is claimed by author Peter Moon that in 2003, the Pentagon discovered, through the use of state-of-the-art satellite technology, an anomaly within the Bucegi Mountains. The Pentagon was able to secure an alliance with the most secret department of the Romanian Intelligence Service which is known as Department Zero.
Watch this documentary for more info:

Credit: CHANNEL3X
The Romanians and the Americans used a Pentagon secret technology to penetrate a chamber inside of the mountain had been inaccessible to humans. There they discovered a holographic Hall of Records left by an advanced civilization near three mysterious tunnels leading into the Inner Earth.
Peter Moon was brought into the fold through his Romanian Publisher who just happens to be the publisher of this remarkable story.
Moon’s original connection to Romania came through Dr. David Anderson of the Time Travel Research Center, recognized that such satellite technology would had to have utilized Dr. Andersonâ€?s proprietary space-time technology for maintaining satellites in orbit and pursues the matter further. This leads Peter Moon on an adventurous journey to Romania to visit the Romanian Sphinx and a remarkable encounter with his old friend, Dr. David Anderson. There, he learns of a mysterious association between the mysterious time travel scientist and Radu Cinamar. Tunnels from this library lead into Inner Earth, where a long-buried culture once thrived along with what appears to be a time machine. Force-fields protect the place, designed for 16-foot-tall beings. Is this a thriving, as-yet undiscovered colony beneath our feet, evidence of extraterrestrial visitation of UFOs, or our own species in some earlier incarnation? Is Inner Earth a parallel universe intersecting across time and space, or is it something we as yet do not understand?
Authors Peter Moon and Romanian investigator Radu Cinamar tell of a secret chamber in their books that was discovered in 2003 beneath the Romanian Sphinx in the Bucegi mountains that is said to contain an ancient “Hall of Records” with vast information in holographic form left by an advanced civilization near three mysterious tunnels leading into the Inner Earth, Tibet and Giza. The book “Transylvanian Sunrise” chronicles the discovery of these modern-day artifacts that represent the dawn of a new era for Humankind.
Moon traveled to Romania and brings first-hand knowledge of the discovery and the incredible journey of those that experienced the alien technology inside the chamber. His books, Transylvania Sunrise andTransylvania Moonrise chronicle the discovery of the chamber and the strange artifacts, which according to Moon and Cinamar, represent a deep understanding of our origins and has the potential to usher in a new era for humankind. "
Source credits: http://beforeitsnews.com/beyond-science/2014/05/ancient-holographic-hall-of-records-found-in-romania-2446252.html