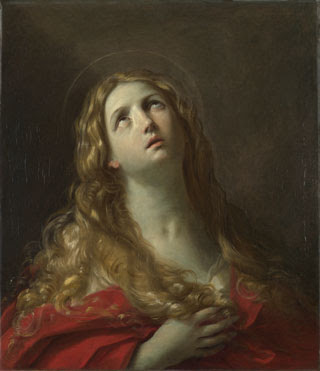 "Before later scholars interpreted her as a prostitute, Magdalene was named “The Apostle to the Apostles” by early church leaders for her importance in Jesus's inner circle."

On Mary Magdalen's day(22 July):
The feast of Mary Magdalene, celebrated by Catholics on July 22 around the world, focuses on one of the most infamous characters of the New Testament. Described by different scholars as a prostitute, Jesus's closest disciple-- Mary Magdalene -  is one of the most enigmatic figures of the Bible. Here are a few facts and traditions for the 2015 celebration of her feast day:
2.The Gospels of Mark and John both name her as the first person to discover Jesus after the resurrection.

3. Before later scholars interpreted her as a prostitute, Magdalene was named “The Apostle to the Apostles” by early church leaders for her importance in Jesus's inner circle.
4. Many Catholic parishes use Magdalene's feast day to talk about women's leadership in the church. "We now know that Jesus included women in his closest discipleship, that women such as Mary of Magdala, Susannah and Johanna probably underwrote his Galilean mission, and that women held leadership and ministerial roles in the early church identical to those held by men,” said Judith Davis,the organizer of the feast in the small town of Goshen, Indiana.
5. Princess Charlotte, daughter of Princess Kate and Prince William, was recently christened in St. Mary Magdalene church.
Princess Charlotte was christened at St. Mary Magdalene's Church in King's Lynn.  Chris Jackson/Getty Images
6. Her name comes from the historic city of Magdala, located in current-day Israel. Magdala can also mean "fortress" or "elegant" in Aramaic.
7. Her remains are said to have traveled from Rome to eventually end up in La Sainte-Baume, France. During the French Revolution, the church was destroyed, though many believe that her head is still there to this day.
8. According to essenic traditions, believers can celebrate her feast day by making oils or baking the French biscuit madeleines (magdalens).
9. The symbol of Mary Magdalene is an alabaster jar decorated with a skull to symbolize penance, also called a memento mori.
10. Mary Magdalene is the patron saint of apothecaries, prostitutes, and hairdressers.
11. One practice inspired by Magdalene is the painting of Easter eggs in the Orthodox tradition for Pascha. The Church legend says that a Roman emperor did not believe Mary Magdalene when she told him of Jesus's resurrection. He told her "If he is risen from the dead, let this egg turn red." Lore has it that the egg did indeed turn red, inspiring the tradition of painting Easter eggs.>>
Source: http://www.ibtimes.com/feast-mary-magdalene-2015-11-facts-most-mysterious-woman-bible-2017845