How the solar flares could affect you - 5D transformations &WAVE X 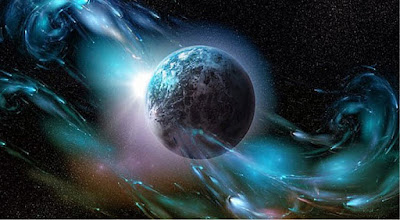 
You are actually the best person to answer this question. Earth and its inhabitants have been receiving bursts of Source light energy in the form of solar flares and gamma rays for thousands of years now. As Earth, the solar system, and the galaxy aligned with the center of the Universe at the end of 2012, all were able to begin to receive rapidlyincreasing transformational energy waves from the center of the Cosmos, or Source, that are raising the vibrational frequency of everything in its path.
2012 to 2013 seemed like a period of rest and preparation for many people. It seemed like nothing had happened and that we were stuck in a never ending time loop. The party started up again in 2014 as the chaotic world events began to reflect the inner changes in people. The end of 2014 and the beginning of 2015 brought wave after waveof transformational energies which have sent the general population into a tailspin that will most assuredly change the world forever.
Look back to 2012 and review the way you have changed since then. Are you a different person? Do you have a better understanding of what has happened in humanity’s past and what is currently happening to our DNA? By looking back at the beginning of the acceleration and how you have changed, you can get a good idea of how you will be handling the energies of Wave X.

Those that have taken a fast track awakening have literally transformed 180 degrees in the last five years. These are the people who were literally “asleep” and all of the sudden had a huge awakening that something was very wrong in their lives and there was an urgency to find out what it was. This led to dedicating most of their time into research while following thread after thread in order to find out the truth of who they are and why they are here.
The fast track individuals had an especially challenging time integrating the energies through their bodies in such a short time. These people may have had major flu like ascension symptoms two or three times since then as the body was detoxified and energetically cleansed. They have had to work really hard through a few “deaths” of the ego and lower personalities in the “Dark Night of the Soul” phase.
Most fast track people will integrate the Wave X energies with swiftness and grace. They are used to change and are not afraid to dedicate every second of their lives to integration and exploration. How far the fast track people will take it depends on the amount of integration what has been done in this lifetime coupled with the overall soul integration and experience.

Those that have been awake and integrating energies for many years and some since the Harmonic Convergence of 1987 have chosen the route of the Pioneer. They had to set the stage for the massive amount of people to begin to awaken since 2012. The Pioneers’ work included gridwork, energy healing, psychic readings, channeling, and writing to explain to the future lightbringers what would be in store for them. The Pioneers chose a long and steady path of shifting and preparing that has prepared them for Wave X due to the experience and wisdom they have accumulated in this lifetime. Many of the Pioneers have done this type of work in other lifetimes and may have been awake and aware of who they are and what they needed to do since childhood.
Just because a pioneer has been doing this their whole life does not guarantee a golden ticket through the changes that are happening on the planet at this time. Some may actually find this time extremely difficult because they are usually a few generations removed which naturally means they might be resistant to sudden change. How a Pioneer integrates the upcoming galactic wave will depend on how much they are willing to give up their well established practices as everything changes into a new co-creative and interactive stage of quickly blossoming revelations. A guaranteed method of integration of Wave for the Pioneers would include letting go and being their true authentic self. The beautiful merging of Pioneer energy with the Indigo energy will build a bridge for many of the Fast Trackers to integrate this new energy and to become prominent leaders and teachers of today.

The Star Children and Indigos

The Star Children and Indigos can be grouped together because they are the game changers. Star Children are today’s children who know who they are and possibly already have three stands or more of DNA activated. Indigos include children and adults who have always known they are here to anchor the new energies and to go through this shift in consciousness with the planet. The Star Children and Indigos are already tuning into Wave X as it approaches the planet and are anchoring the energies in advance in order to help step down the galactic frequency a little at a time because the energy is too refined to assimilate all at once.
Indigo adults can be fast trackers if they took a long time to awaken to who they are and why the came. Once awake, they had to hurry and catch up on their personal work in order to know what to do when the big waves of energy came. Just by being incarnated here with their light on the planet at this time, Star Children and Indigos will have completed their mission.

Everyone has played an important role in preparing for the planet to receive her cleansing Wave X energies. There is no limit to what can be accomplished with these energies. A twelve strand DNA allows twelve dimensions to be accessed, and doors that have been closed for thousands of years will be open. You have to be willing to find the doors and walk through them. You will find that you can return to Source any time you wish to bask in the void of love and peace. After you have fulfilled the emptiness inside of you that always longed to go home, you will gain a whole new appreciation for Earth and the physical body experience she provides.

Most people that have intentions to “move into the fifth dimension” will be pleasantly surprised when they will have access to higher dimensions and places in space and time outside of the constraining matrix overlay we have been trapped in. As more people explore outside of the prison walls, the false light matrix will no longer be supported and will dissolve. Access to higher dimensions will not necessarily unfold in linear fashion. As multidimensional beings, we have always been connected to all dimensions but have forgotten how to access them.
Many people who have advanced metaphysical abilities will experience an opening that will allow them to be the teachers of abilities they never dreamed possible. People who are already reaching areas past the astral are going even further. Those who are already channeling information from their higher selves will have instant access to Universal Akashic records. In the very near future, teleportation should be possible through the dematerialization and re-materialization of the physical body as our bodies transform into more of a light body than a physical dense body. Regeneration and rejuvenation of the physical body will take care of all diseases and aging. Manifesting anything you need from the background energy will provide for limitless creation coupled with creative responsibility.
Those who have readied themselves for the manifestation of metaphysical abilities through healing and clearing will be able to tap into them with the introduction of Wave X. This is truly an exciting time to be alive on the planet no matter what chaos unravels around this transformation and upgraded capability.
The Indigos and Star Children will invent and manufacture the technology needed to clean the planet up. Those who have proven to be negative and service to self will be split from those who operate out of love and harmony. The world will be changed forever, not just a thousand years. How much the world will change will depend upon us, and how fast we get there will depend on how quickly we can dissolve the constraints. How big are you willing to dream?
Will Wave X change the world in an instant? The world has already changed in the future. Outside of time, the world is perfect. The route to merging perfection with the now in physicality and the time it will take to manifest this perfection depends upon humanity. While some people will definitely be changed immediately when the energy wave comes in September, others will struggle to know what hit them. Prepare yourselves now with the intention that you have no limits to what you can do with this energy."
Source: http://in5d.com/how-wave-x-will-affect-you/
Love,
Cristiana Dragomir Eltrayan
Holistic Therapist & Coach
(Soul Healing)
Tel:+4